I just Googled “knitting jokes” and that came up. Pretty good, ay?

I also know it to be true, because I spent most of the day last Sunday in Gowanus with the good people of Knitta as we attempted to cover two white Ford trucks and a grip of cardboard boxes in loops of yarn.

Grace and me with much yarn

What I didn’t know going into this was… pretty much anything. My friend Grace only told me she was going to “help out with an art installation involving yarn” and that they needed extra hands. Sure!

At 9:00 am, when I arrived at the production warehouse that would be our staging area, people were already busy spreading out big yarny expanses to sort them by pattern.

As the unfurling continued, I began to suspect something…

Wait—this was going to be a vodka ad!

Well, so be it. Lesson number one.

The twenty or so of us crafty types got to work plastering the trucks and covering the boxes, which would later get stacked in the back like presents. 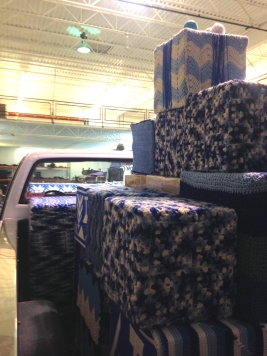 Cubes in the back

The skilled knitters among us did the heavy lifting of actually knitting things together when that was called for; the others (like me) took turns whip stitching, hot gluing, and velcro-taping the fibers into place.

Our fearless leader, Magda Sayeg, a not-quiet woman in big eyeglasses, would be my lesson number two: she’s the mother of yarn bombing, people!! It was an awesome trip to hang out and get guidance from a real street art luminary all day. Also fun: although Magda looks like she’s about 20 years old, her two kids showed up at one point. They were very nice, and I think they’re in high school!

It was satisfying to watch our collective labor start to add up to something as the day wore on, and I was also stoked to see about one-third dudes making up the itinerant knitting crew. Yeah, fellas! We all chatted and snacked on really delicious Amy’s Cheddar Bunnies and listened to dreamy dance music as we worked. The time passed quickly.

Ergo, lesson number three: Doing crafty stuff is meditative and fun, even when you have to keep staring at a vodka hashtag.

Bonus points: on my bike ride home, the best Brooklyn sunset! Shots straight from the phone: 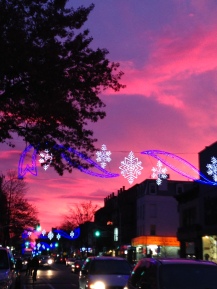 I should have known when I learned that a friend of mine named her blog after a Philip K. Dick novel that she was into science fiction (or should I say speculative fiction? help!), but I really didn’t think about it.

Only several years later (which was already several years after I’d met her) did the topic of sci-fi come up in earnest between us. We were in a rental car on our way to a wedding and she said, apropos of not much, “Have you ever edited a book?”

I said not exactly, but mentioned a few things that kinda-sorta came close. Why was she curious?

“Well, I wrote a sort of sci-fi novel maybe 10 or 15 years ago,” she said, “and it’s basically been sitting in a drawer since then. Recently, I’ve been feeling like I’m ready to do something with it, but I think it could use a second pair of eyes. I’m not sure exactly what an editor would do, besides be a genius and fix all my mistakes… But let me know if you want to talk about it.”

I was SUPER intrigued. For one, my friend wrote a secret book!! For two, it was a sci-fi book—especially weird!! For three, I love me the prospect of a crazy new project.

I’ve found that one of the best things about my first year-and-change of full-time freelancing has been the ability (or heck, sometimes the necessity) to take on a wide variety of editorial gigs. As I heard the author John Vaillant recently say, “I am a professional generalist.” Aside from the thrill of solidarity it gave me to hear a big-name writer identify himself that way—I’ve always been a mega-generalist and sometimes struggled with my lack of speciality, but he’s proof you can have an awesome career as a jack of many interests—his quip also perfectly described one of my favorite job perks: variety.

I told my friend that, although I: a) am not a fiction writer, b) am not even a huge fiction reader, and c) have never, to my recollection, read a sci-fi novel*, I was confident that I could at least do a decent job of copyediting her book, and that if I found I had any developmental suggestions for her in the course of doing so, I’d pass them on. She agreed to hire me, and off I went.

I’ve been combing through her formidable 480-page book since the middle of last month, with the goal of finishing by year’s end, and I’m having a blast with it, for many reasons. To name a few:

So this post is part shout-out to my talented and industrious friend for believing I might be of some help to her labor of love, part written revelation about the wonderfulness of changing things up at work, and part teaser—’cause this book should be out on Kindle next year and I’ll be engaging in even more shameless self-promotion then!

Hey other freelancers: Do you like the way variety shapes your professional life? (Or maybe you hate it?) Penny for your thoughts in the comments.

*Unless you count a college boyfriend trying to read all of Frank Herbert’s Dune to me in installments. I tried hard to keep up with it, but usually fell asleep before he finished.

We shoulda been in pictures!

But we weren’t, because we were too busy talking and making awesome connections. (So I’m pasting some non-in situ photos and links here.)

Today, my friends Alison (an honest and passionate real estate agent) and Kaiti (an incisive and graceful designer and developer) convened our first Freelancers’ Lunch, an opportunity for a half-dozen (okay, seven) fun entrepreneurial types to talk about what we do, ask each other questions and seek advice, and see if any biz connections came readily to mind. (Yes, this was also the outgrowth of our semi-hashed summer experiment: Trying to Form a BNI Group in North Brooklyn. Only Alison succeeded with her burgeoning Influentials group. Go Alison!!)

I knew I’d have fun with these guys; I know them all (and many of them already knew each other) and was looking forward to having lunch with them no matter what. But I was truly surprised by how much we had to offer each other—especially considering how many of us were already friends!

The connections probably numbered in the dozens, and everyone took care to make actual notes to follow up (that’s right—I don’t do business with flakes).

And even beyond potential work introductions, people were batting a thousand:

We’re planning to convene again after the holidays, and will try to get a few more heads in the mix. Even though I’m a classic hippy-dippy, bleeding-heart people person, I admit I doubted the power of the personal network at the beginning of my freelance life. But I’ve gotten 90% of my rent-making business in the past year through personal connections, and 90% of my clients have been absolute joys to work with (the other 10% weren’t rotten, either).

So I can now personally attest to the professional as well as personal efficacy of keeping your relationships up. Talk to people you like: tell them what you need and listen to what they need. Then write it down and follow up.